How do I approve a PCB for Production

When your PCB is in a state that it is ready to be ordered, you can tag the PCB as approved for production. This will create a permanent snapshot of the PCB .

When multiple teams within an organization are working together to build and release a product, it is useful for an engineer to be able to signal to a purchaser the specific revision of a PCB that is ready to be produced. Additionally, it is useful to be able to ensure that experimental, or even accidental, changes to a PCB after it has been ordered do not make it into a future order.

When your PCB is in a state that it is ready to be ordered, you can tag the PCB as approved for production. This will create a permanent snapshot of the PCB that, regardless of the changes made to the design files or BOM in the PCB interface, will not change.

To approve a PCB for production, click on the star to the right of the PCB name in the PCB interface. 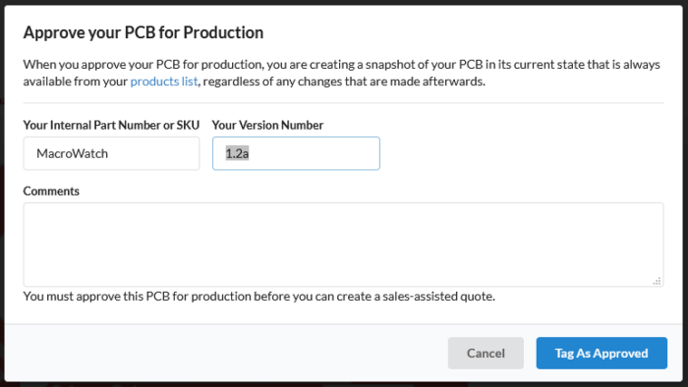 Next, simply provide the part number, or SKU, you wish to assign to the snapshot, and an internal version number. Both of these fields can be arbitrary strings of text, and should be something meaningful that helps others in your organization identify the product.

After the PCB has been approved, you can continue to iterate and make changes to your design, bill of materials, and placements, while still being able to order the approved version.

The SKU and version combination is unique; e.g. you can only have one MacroWatch SKU with version 1.2a. When saving the updated approval, you will be given a choice: replace the existing SKU, or update the SKU or version number (e.g. 1.2b).

Note that replacing an existing SKU and version combination does not update any existing custom quotes or orders created using the old version.  It will only change future actions against that approved PCB.

Need help with approving your PCB for production? Contact our support team for a quick answer!